There are four seasons in the Himalayas: Spring; Summer; Autumn, and Winter.

Spring and Autumn are the most popular season to trek in ABC as these seasons have the best weather all year round. During these months, weather and temperature stabilize and are mostly mild.

Winter grants you the crystal-clear views as long as you are ready to trade off with temperatures that can get below the freezing point in the evenings and mornings, especially in the higher regions of the mountains.

Although in the summer-monsoon of June and July, the Annapurna region along with the whole of Nepal trekking experiences frequent and heavy downpours hindering the views and creating muddy and slippery trails making trekking in monsoon less favorable.

However, what time of the year you should go to ABC also depends on the kind of activities and the experiences you are seeking to have while there.

Below are the different seasons described to help you decide when is the best time to trek to the ABC.

Annapurna Base Camp in Spring (March, April & May) 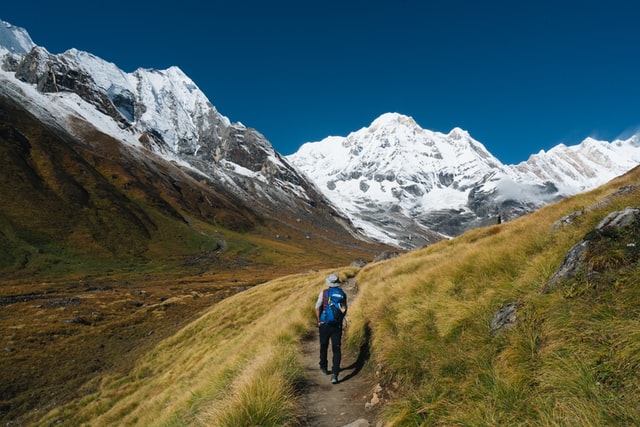 ABC trek in the spring season

Spring is the second most popular trekking season to visit the Annapurna Region and amongst the best time for Annapurna Base Camp, as the weather and temperature are most pleasant at this time of year. Spring in the Himalayas beings early in March and lingers till the end of May.

Skies are clear most of the time offering the best views of the Mighty Annapurna and its surrounding peaks. Also, there is little to no chance of problematic rainfall. Your trip goes smoothly on schedule.

The temperature is warm enough to feel comfortable and neither too hot as summer nor too cold as winter. Days are longer and you can walk at your own pace while taking time to enjoy the silent serenity.

Meanwhile, the temperature in Kathmandu and Pokhara can be between 15 to 20 Degree Celsius. Flights to Pokhara are smooth and the helicopter ride is also more blissful.

Also, spring is the vibrant season of rhododendrons and colorful landscapes with blooming flowers of many species that certainly make your trip more colorful and memorable. All these attributes make spring as one of the best times to visit the Annapurna Base Camp.

However, more trekkers set to embark on this journey when ABC experiences heavy traffic. But if you are in search of the best weather and favorable temperature for Annapurna, then that’s a trade-off you may be prepared to make. Even in the peak trekking season, you can’t find any mules/yak and the crowd like in the Everest base camp trek. 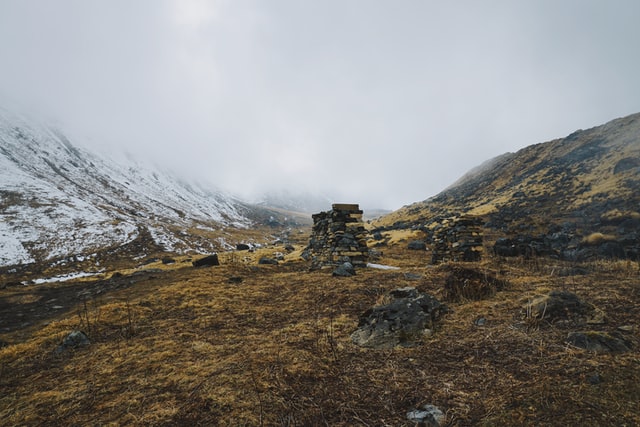 ABC Trek in the summer season

The summer monsoon in the Himalayas usually arrives in early June and stays till early September. The season of summer also coincides with the monsoon season. Days are very hot and the Annapurna region experiences frequent rainfall with clouds in the sky most of the time making trekking to ABC in summer less favorable which is the main reason why trekkers usually avoid this season.

Also, rainfall generated during the summer monsoon leaves the trail muddy and slippery making unfavorable circumstances for the trekkers.

Furthermore, the heavy rainfall also increases the chances of landslides and avalanches. But on the bright side, if you are a biologist then this is the best time to study flora and fauna as the vegetation is much alive with decent forest views. But if you are to trek in the summer-monsoon, then make sure you bring along waterproof clothes, strong grips, and don’t forget good quality boots.

As this is the offseason for trekkers, most teahouses remain closed. However, you will have more room availability at open teahouses and lodges and can enjoy discounts and more facilities. Although, trekking in Summer-monsoon in Annapurna is less recommended. 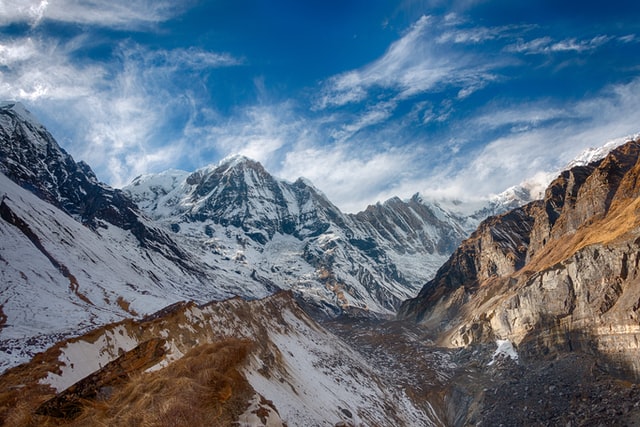 ABC trek in the autumn season

The advent of Autumn marks the end of the summer monsoon season and the weather is once more open, offering you magnificent views of Annapurna and its surrounding peaks. Heavy clouds are gone and the weather is most pleasant and stable. Allowing your trekking to go smooth on schedule.

Clear skies and fresh air characterize this time of year, with October to early November blissful for trekking. While the landscapes are still verdant, the rivers are still alive and the waterfalls in the lower region stirring.

Also, autumn is also the season of the vibrant colorful Nepali festivals of Dashain and Tihar which will certainly add more colors to your trip. However, this also means a considerable amount of crowd on the trails and hotels.

As it is the most popular season to trek in the Annapurna, we highly advise you for prior booking of your trip for hotels and accommodations. 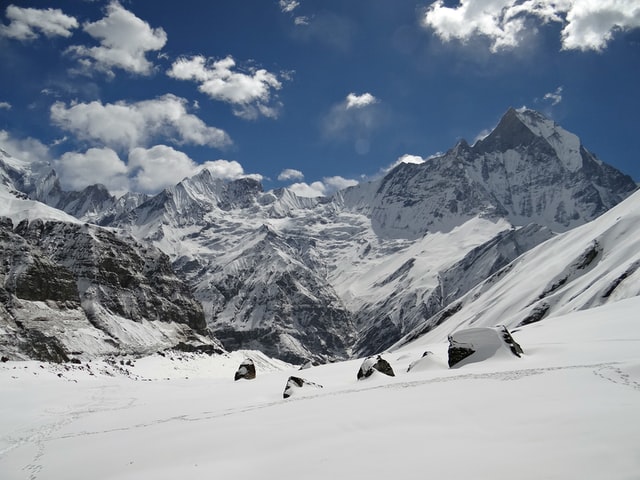 ABC trek in the winter season

The views during the winter are dry and crystal-clear and conceded to be the best except for the occasional snowfall and morning mist. As long as you are ready to handle the cold temperature, you will have a pretty unique experience in winter.

The weather during the winter season is calm and you will get to enjoy the stunning panoramic views of the Annapurna and its surrounding peaks. On a clear day, you get the clearest and the best view of the whole year. But as the days are shorter, you get fewer trekking hours than in other seasons.

Thickly layered snow cover the trails and all over the region. The trail remains silent as only a few trekkers embark on this journey during the winter season.

Above all, there is much risk of Avalanche during the winter season. Most Tea houses remain on vacation during the low season of winter.

Avoid the low season of the Summer monsoon and winter season and aim to trek in the high season of Spring ( September to October) and Autumn (February to May) during which you have assured mild and stable weather and your trekking goes smooth on schedule.

If you are a peace lover and do not like crowds, then trekking during the peak seasons of Autumn and Spring is not advisable. We highly recommend pre-booking for the high seasons to book the accommodations and flights to Pokhara.

If you are a first-timer and less experienced trekking in the mountains, then trekking during the off-seasons of winter is not advisable.

Should you have any queries regarding your trip to Annapurna Base Camp and any other activities in Nepal, the Glorious Himalaya Team is always there to assist you with your once-in-a-lifetime experience in the Himalayas. Feel free and just let us know.