Somewhere in the mountains, below the horizon, and above the mysterious confluence of the Dudh Koshi and Imja rivers, lies a beautiful structure in the form of a monastery called Tengboche. Filled with immense spiritual and religious value the region competes with the beauty of nature.

Tengboche Monastery is the largest monastery in the Khumbu region, via which maximum trail paths for the Everest region pass. This sacred site is located in the Khumjung village of Solukhumbu district in Nepal and is one of the most popular destinations for travelers willing to visit the Everest Base Camp.

Designated as a part of the “Sacred Site Trail Project” of the Sagarmatha National Park, the locus is also an admired night stop for visitors in the Everest region. There are a lot of things that describe the beauty of Tengboche. But the history, the nature, and the culture and people who live here sketch the significant importance of this place.

In 1916, the historic monastery of Tengboche was established by Lama Gulu. It is said that when Lama Sangwa Dorje gave a blessing to Lama Gulu to build the monastery at Tengboche village, this holy shrine got assembled here. It also went through destruction two times. Firstly, during the 1934 earthquake and the next time it was destroyed by fire in 1989.

The settlement of the Sherpa people in the Khumbu valley began in 1533. Someone behind the recognition of Khumbu as a religious place is Guru Rinpoche—the great sage of that period.

He is also the founder of Tibetan Buddhism and the Khumbu Valley and turned it into a spiritual sanctum. All his history remains alive in the monasteries of Khumbu.

Numbers of holy shrines and monuments started to be formed in the Khumbu Valley along with the influence of Buddhism. In 1667, the Pangboche temple was built in Pangboche for the first time in the entire Khumbu region. After this, many others were established, such as Zhung Temple (1720) and Khumjung Temple (1831).

The destruction history of Tengboche Monastery

The earthquake demolished it for the first time in 1934. Again in 1989, a severe fire brought on by an electrical short circuit on January 19, completely destroyed the monastery. Due to the massive fire all the valuable scriptures, statues, murals, and wood carvings were destroyed. After the earthquake of 1934, Umze Gelden took the initiative to rebuild the Tengboche monastery with the support of monks, the local community, and skilled manpower from Lhasa. After that, it entrenched itself as a landmark of the Khumbu region and gained wide recognition among travelers from across the world.

And after the second time destruction of the monastery caused by the fire, it was rebuilt by Nawang Tenzing Jangpo. Mr. Jangpo is considered as the incarnation of the founder Lama Gulu, who is the spiritual leader of the Sherpas. With the help from various international foundations, local communities and international visitors it was possible to rebuild as in the present structure. Sir Edmund Hillary and Himalayan Trust, American Himalayan Heritage Foundation and Tibetan painter Tarke-La plays a vital role to rebuilt this monastery after the destruction caused by the fire. 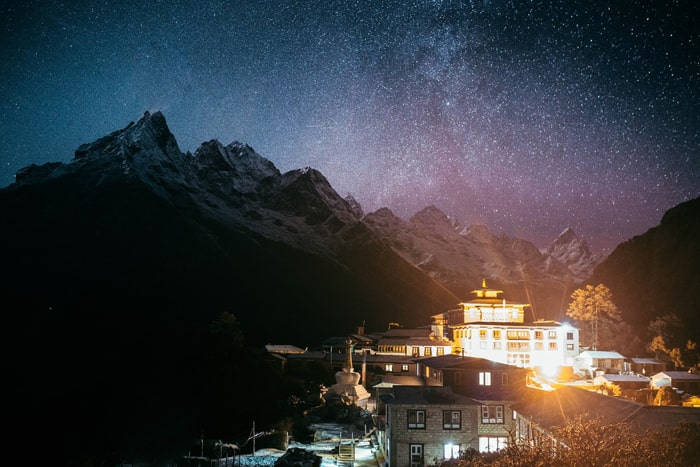 Along with nature, the structural formation of the monastery, makes the traveler feel alive with positivity. Adorned with stunning art, including paintings, statues, and carvings, the architecture is built with stone masonry. A magnificent view of the fusion of nature and heritage gives a lifetime experience for the visitors.

The Culture and the People 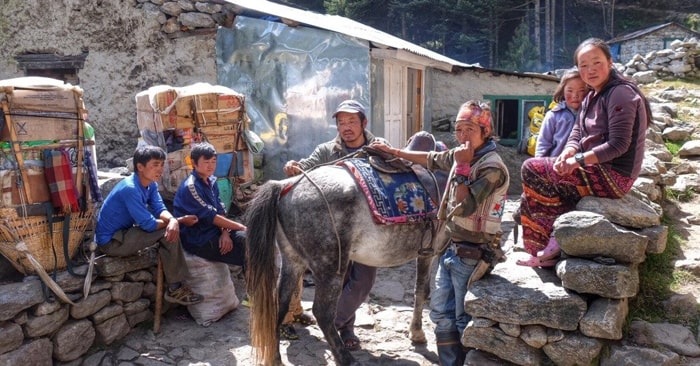 Inhabited by Sherpas, the people who live here play a tremendous role in preserving culture and tradition. Culture and festivals in Tengboche are the principal elements of attraction in the Khumbu region.

One of the most famous festivals celebrated here is “Mani Rimdu”, where Mani is attributed to “part of the chant of Chenrezig” and Rimdu attributes it to “small red pills that are blessed during the festival”. It occurs during the tenth lunar month, or the autumn season, and lasts 19 days. During this time, there are a lot of tourists. 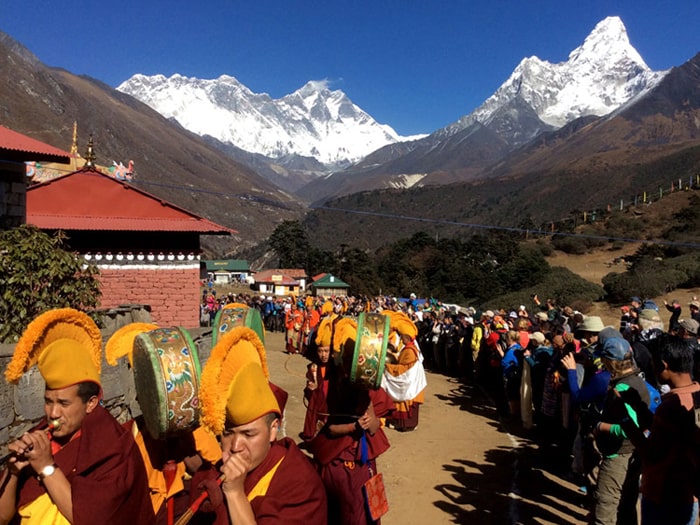 Mani Rimdu begins by demonstrating a form of art called the Mandala, which takes four days to complete. Mandala art is drawn using colored sand, which is brought from a specific location on a hill. Besides this art, sixteen types of dances are performed during this festival. Active participation of local people can is throughout the celebration. Additional rituals, such as the fire rite, are performed by Lama Guru to remove the negative energy that affects the world.

Spring(March-May) and autumn (September-November) is the best time to visit the Tengboche Monastery. For a clear and impressive view of nature and access to an incredible trail path, the weather gets supportive during spring and autumn.