Who is Kristin Jonassen Harila?

Kristin Jonassen Harila is a professional athlete born on 28 March 1986 in Northern Norway. Harila is a former cross-country skier, runner, and climber who runs her own guiding company and leads ski expeditions in the arctic. She is not just a perfect sportswoman but also an open and enthusiastic mountain climber. In 2019, she changed her mind and quit her job to live her dream adventure.

Currently, Kristin is on the way to summiting the world’s 14 peaks above 8,000 m in just six months. She is on the quest to break the stigma of plaguing female mountaineers. Likewise, Kristin wants to be the first woman in history and the second person ever to climb all 14 peaks 8000m above in less than six months. Harila aspires to break the previous record of six months and six days set by the Nepali mountaineer Nirmal Purja.

In a record-breaking 106 days, Norwegian Kristin Harila has successfully ascended 11 mountain summits above 8000 meters. In order to achieve her mission of 14 peaks, she will climb three mountains in the third phase (Shixapangma, Cho Oyu, and Manaslu). If she succeeds in breaking Nirmal Purja’s record for the most 14-peak climbs ever, she must do it before November 3, 2022.

In just over five months, she hopes to summit each of the 14 summits that rise above 8,000 meters.

She aims to show that a woman can also do the same hopefully in a shorter time.

The triumph of Harila

An Enthusiastic and brave mountaineer Halira set the world record by climbing Mt. Everest and Lhotse in just 9 hours. Like record holder Purja, she also used the helicopter to get to the base camp of Everest.

The Norwegian climber gained recognition among mountaineers all around the world, by ascending six 8,000-meter Himalayan peaks in record time this spring.

Her team (Pas Dawa and Dawa Wongchu) also has broken one of the records for the fastest climb by Nirmal Purja (NIMS dai) who climbed five peaks above 8,000m in 29 days.

Out of the 14 peaks above 8,000 meters on the earth, she has now scaled twelve of them. She has reached the summit of the following 14 peaks so far: 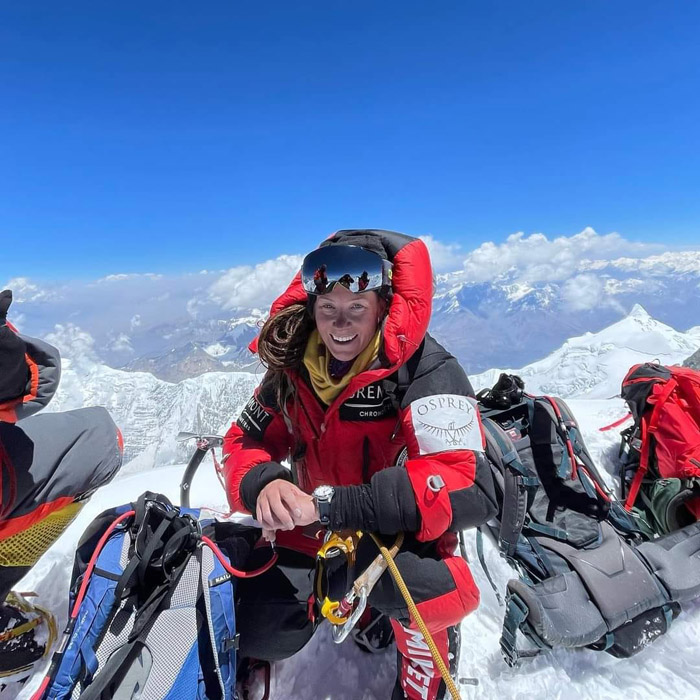 Kristin Harila at the top of Annapurna I. Photo courtesy: Exploreweb

Norwegian climber Kristin Harila is just back after conquering the 8,162m Mount Manaslu on 22nd September 2022. She has left for Pakistan to summit the five peaks in Pakistan that are above 8,000 meters.

Bremont, a watch company from the UK, is providing sponsorship for Kristin to complete her women can too project because it is a costly expedition. Apart from that, Harila sells her apartment to accomplish this journey.

In her recent interview, she said: “When I presented the project, they simply didn’t believe me. And now that I have come so far, many of these companies are contacting me to resume negotiations.”.

“I hope it will make the road a little easier for girls in the future and show that we can also choose a life that goes beyond what is considered a “normal” way of living ❤️ So, why am I doing this”

Let’s support her amazing effort. All help is needed to complete this project. The link is given below for those great people who want to support Kristin Halira’s project, Broment 14 Peaks, come true. Visit her Gofundme page.

Her motto is “Women too”

Thirty-six years old Harila wants to inspire and encourage women through her project to achieve their goals. Harila wants to see more gender equality in sports and wants to change the way that people view women in general.

“women are as capable as men to the summit, but if you see back in the history of climbing, there are men in the movies, books, or news—it’s more men than women, but it’s about change, and so now we see more and more women climbing- Harila said.

“Until now, it has been like the strong macho men going out climbing mountains, and I can see it now, and when I talk to the people that are not in this sport, they believe men are more capable than women.”

Thus, Harila’s motto is, “Women too.” It does not only mean that women can also climb, but that the outdoor sector should put more emphasis on women.

“Climbers like her are very important to set an example,” Sherpa said. — AFP