By Glorious Himalaya on January 2, 2023 in Travel Tips, Trekking

Nepal is a country with significant variants of geographical features and regions. Its location in subtropical latitude accounts for its climate variations. The climates vary throughout the year depending on altitude and season. The winter season in Nepal lasts from December to February. Major cities such as Kathmandu, Pokhara, Chitwan, and others hardly experience temperatures below 5 ° Celsius. Some wintertime treks are regarded as being particularly difficult. However, the season offers clear skies with no rain and the trails are less crowded. There are a number of treks one can look forward to completing with relative ease. The best five winter treks are mentioned below: 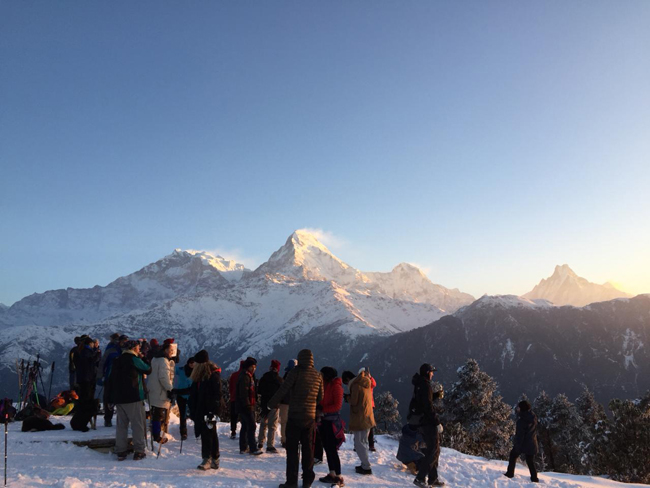 Ghorepani Poon hill trek is one of the popular winter treks in Nepal. It is a short and relatively easy trek for inexperienced newcomers in the Annapurna region of Nepal. The trek is about 40 km and can be completed in 3-4 days. The most popular starting point is Nayapul, which is 1 and half hours by bus from Pokhara, and the final point is considered Ghandruk. The total ascent on the trip is 3200m and the total descent is roughly 1996m. It can be treated as an acclimatization trek before attempting challenging routes like the Annapurna Circuit.

The Ghorepani Poonhill trek offers a panoramic view of the snow-capped mountains. The heavy snow coat in the winter greatly compliments the features of the mountains observed from there:  Dhaulagiri, Machhapuchhre, Annapurna, Gangapurna and Hiuchuli. The winter trek in the Ghorepani is the best time to catch the snow-covered mountains of the Annapurna Region. 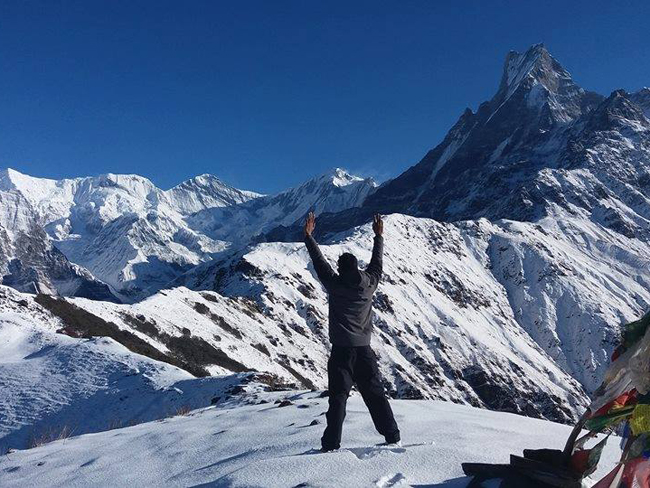 The Mardi Himal Trek is another suitable trek that you can complete in the winter season. It leads to Mardi Himal Base Camp, an off-trail journey through stunning scenery in the Annapurna Region of Nepal. The base camp is at an altitude of 4500 meters and the scenery is absolutely breathtaking. The route is full of spectacular landscapes, traditional rural villages, thick forests and unspoiled wilderness. This is a short trek that both novice and seasoned hikers may complete. Experienced trekkers can complete this trek in 4-5 days. Like most treks in the Annapurna region, the journey begins in Pokhara.

The trek route provides close-up views of Annapurna South, Machhapuchhre, and Mount Hiunchuli. In a way, this is an alternative trek to the classical Annapurna Base Camp trek. The winter is a great time to explore the Mardi Base Camp as a thick layer of snow accentuates the beautiful nature and the majestic Himalayas. 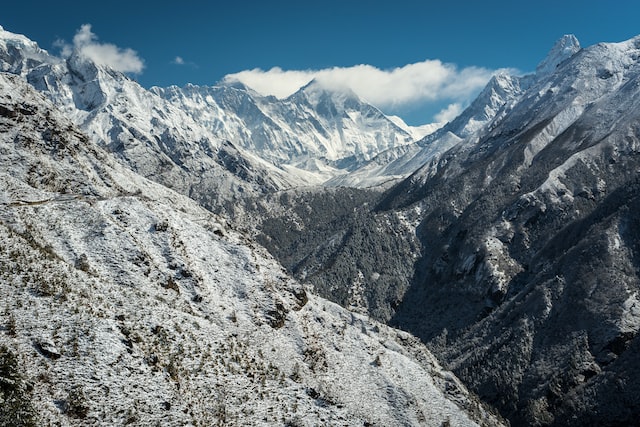 The Everest Panorama Trek is the best trip for the winter season in the Everest region. It is a short trek in the Khumbu Region of Nepal encompassing the magnificent views of mountains like Everest (8848 m) Lhotse (8501 m), Nuptse (7879 m) and Ama Dablam (6856 m). It is the ideal trip for trekkers who don’t have enough time to reach the base camp. The highest point on this trip is at Tengboche at an elevation of 3840 meters.  Even if it doesn’t take you all the way to Everest Base Camp, it still manages to provide you with stunning vistas of some of the area’s most stunning mountains. The whole trek can be completed within 8 days.

This trek is ideal for exploring Himalayan culture and lifestyle. The Tengboche Monastery is one of the most prominent and largest monasteries in the world. It is perched on a hill at the confluence of the Dudh Koshi and Imja Khola rivers. The thrilling flight to Lukla and the rich culture of Sherpas as well as the bustling Namche Bazaar is a treat for a newcomer in the Everest Region. Also, altitude sickness is not a concern in this panorama trek. 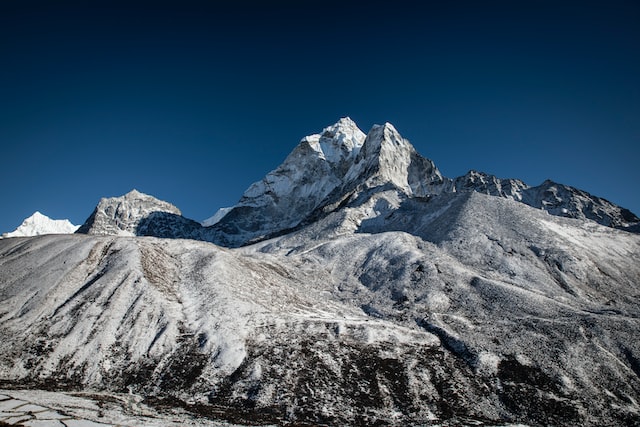 Most people think Everest Base Camp Trek is impossible in the winter season. But, winter is yet another best season to explore the beauty of Mount Everest and it is doable. Due to the low flow of tourists, you can find the finest accommodations with their best services at teahouses. Most importantly, the views of the mountains will be crystal clear. The only thing that you need to keep in your mind is to keep yourself warm while traveling in the winter season.

One of the best treks in the world, the EBC trek is centered on Mount Everest (8,848 m), the highest peak on Earth. The Everest Base Camp trek starts with a thrilling flight to Lukla, a one-of-a-kind domestic airstrip located in the Himalayan region of Nepal. The trail then leads to Namche Bazaar, a small trading harbor in the early days. The base camp journey allows you to connect with these Himalayan people (Sherpas) who are an inspiration to trekkers all over the world.

The historical significance of the world’s most prominent monasteries in Tengboche is another stop on the way. The golden shining Everest view from Kala Patthar is an off-trail hike on the way to the base camp. And finally, the base camp of the world’s tallest mountain is an unforgettable memory for a lot of people.

There are numerous locations throughout the EBC trip from which the majestic Mt. Everest can be witnessed. Also, the Everest region is the most developed and well-run, with a wide variety of cozy tea houses and top-notch lodging and dining options. Trekkers who want to avoid the crowded seasons of autumn and spring should trek during the winter. With the clear scenery of seven of the tallest peaks in the world, the Everest Base Camp Trek is one of the most appealing treks in the winter

Get our Everest Base Camp Trek package for your winter visit. 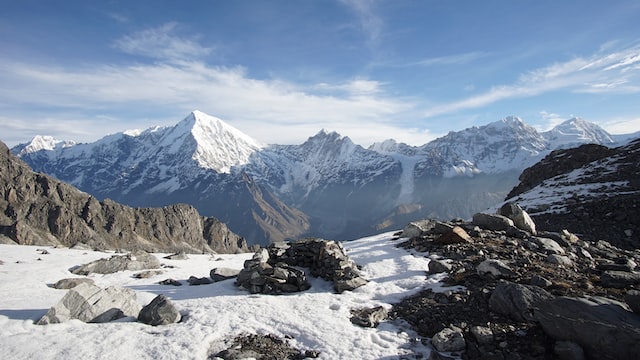 Langtang Valley Trek is a short and enjoyable trip in the Langtang region. The trek takes you through Langtang National Park, a serene landscape filled with majestic flora and fauna, yak pastures, and local cheese factories. It is also well-known for its breathtaking views of the mountains, native hidden culture, and the Langtang Himalayas ranges. A day’s drive from Kathmandu Valley will take you to the starting point of Langtang Valley. The highest elevation of this trek is 3,860 m (Kyanjin Gompa). This diverse trek introduces you to the Buddhist culture of the Tamangs and the ancient monastery of Kyanjin Gompa, located near Tserko. This trek also offers spectacular views of mountains like Dorje Lakpa (6,990m), Langtang Ri (6,370m), and Langtang Lirung (7,245m).

Winter in the Langtang region occurs between December and February. During the winter, you can trek through the snow-covered Langtang valley under deep blue skies. Also, the trail is less congested as it is typically the off-season for trekking in this area. Therefore, the Langtang trip in the winter is a preferable choice for individuals looking to explore nature on their own and snap pictures.

To sum up, the distinctive benefits of trekking in Nepal in the wintertime are the clear skies, the greatest mountain vistas, the calmer paths, and the mild temperatures that are ideal for hiking. The landscape completely changes, and you get views that you would never get in the spring or autumn. Challenging it may be, the rewards exceed expectations.

Are you looking to go on an adventurous trek to the base camp of Kanchenjunga, the third-highest peak in the world? If so, you may...

One of Nepal's most popular moderate-level treks is the Annapurna Base Camp Trek. As you embark on this journey, you will be surrounded by the...

Nepal, the land of the Himalayas, is a trekker's paradise. The country offers an unparalleled diversity of landscapes, cultures, and experiences. In 2023, trekkers will...